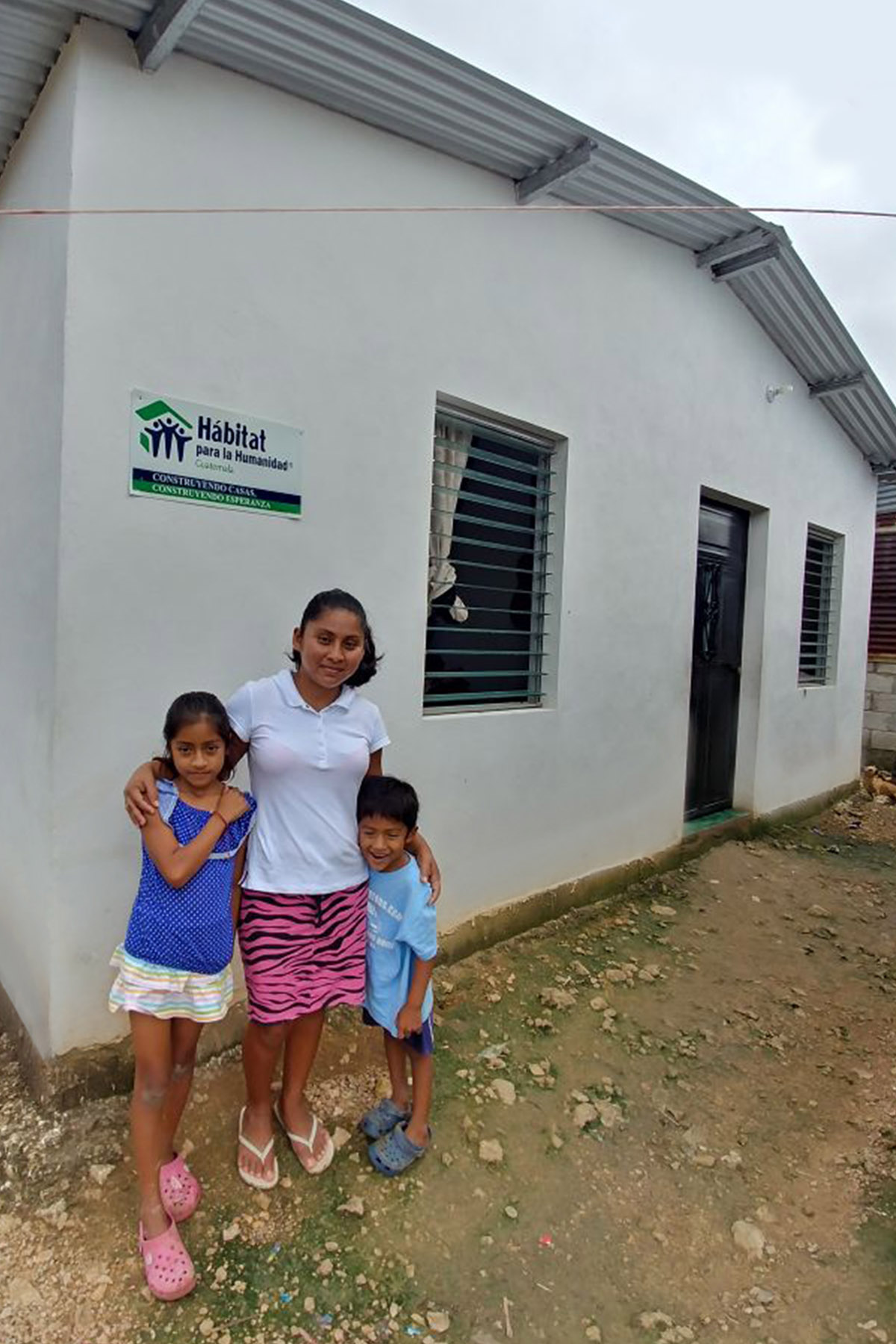 Maria Lopez, 49, is the strong matriarch of a household of 18 children and grandchildren. With so many mouths to feed, she is constantly busy cooking, cleaning, and weaving baskets to sell around town. Accordingly, it is essential that her home has a reliable and functional stove.
For years, Maria cooked on a stove that would start unwanted fires and produce lots of smoke. Her whole family was breathing the stove’s smoke daily and her home was dirty with smoke residue. This all changed when she found out that, with the help of Habitat, installing an alternative smokeless stove would be possible.
Maria has fond memories of the volunteer team that came to construct the stove. She remembers, “The brigade worked so hard. I am so grateful for them.” She can now cook all of her family’s favorite foods on the stove top without burning her hands or getting lots of smoke in her eyes.
In addition to the stove, Maria’s family is happy to have a brand new latrine in the backyard. It has sturdy wood walls, a tin roof with open space for ventilation, and best of all, a plastic toilet covering the earth. Maria remarks, “It is better than our old one, because I don’t have as much of a mess here.”
Overall, the new smokeless stove and latrine have provided healthy and clean upgrades for Maria and her family, taking necessary steps to reduce the risk of lung and and airborne disease.

For Marcela Jojero, age 79, receiving her smokeless stove was an emotional rollercoaster. Amid the excitement of the volunteer team’s arrival and the construction of the new stove, Marcela’s husband, who had been suffering from an illness for some time, passed away. Surrounded by Habitat volunteers and family, Marcela mourned her husband’s death. “It’s such a shame that he couldn’t live to enjoy the stove,” she says. Nevertheless, with her husband’s memory alive and strong, the stove brought much happiness and improvement to her life.
Sacarias Cacach, age 12, and Maricela Cacach, age 13, are two of Marcela’s grandchildren who speak the native Mayan dialect and Spanish. They explain that the new stove is much better than the old one. It is easier to use, produces no smoke, and uses less wood to stay hot. Maricela explains, “The new stove is great. It’s easier to clean and cooks food faster.” They often help their grandmother with cooking on the new stove and cleaning it with a small straw brush. Together they cook tortillas, soups, and vegetables, among other favorite foods. Marcela misses her husband everyday, but is happy to be able to easily cook and share meals with her children and grandchildren.
Their new smokeless stove causes less damage than the old one – both to their health and to their house. The house is no longer filled with smoke, and its users can breathe freely. Now, kneeling over a fire on the ground is just a memory.

Maria Chacah Samol, age 45, and Ana Rosalia Sanic, age 23, live next door to each other and are always busy cooking for their husbands and children. They are both thrilled to have received new stoves and latrines from Habitat, which they agree are much better than what they had been previously using. Ana Rosalia explains, “We called Habitat because, above all else, there were problems with how much smoke the stoves were producing.”
The new stoves use less wood, are bigger, and are much easier to use. Whereas the old stoves would use ten logs of wood to stay hot, the new one requires as little as two. Furthermore, the families no longer have to worry about the health risks of breathing in smoke day after day while cooking. The new stoves produce virtually no smoke, and thus are much safer for their growing families.
Growing families also need clean and hygienic bathrooms, so Maria and Ana Rosalia are grateful to have new latrines. The new latrines are a great improvement, as they are well ventilated and have plastic toilets covering the earth, which are much easier to use and clean.
The two women remember the construction process fondly. They say that the international volunteer team was friendly and hardworking. The new stoves and latrines serve as daily reminders of the wonderful crew that dedicated their time and energy to helping their families live healthier and easier lives.