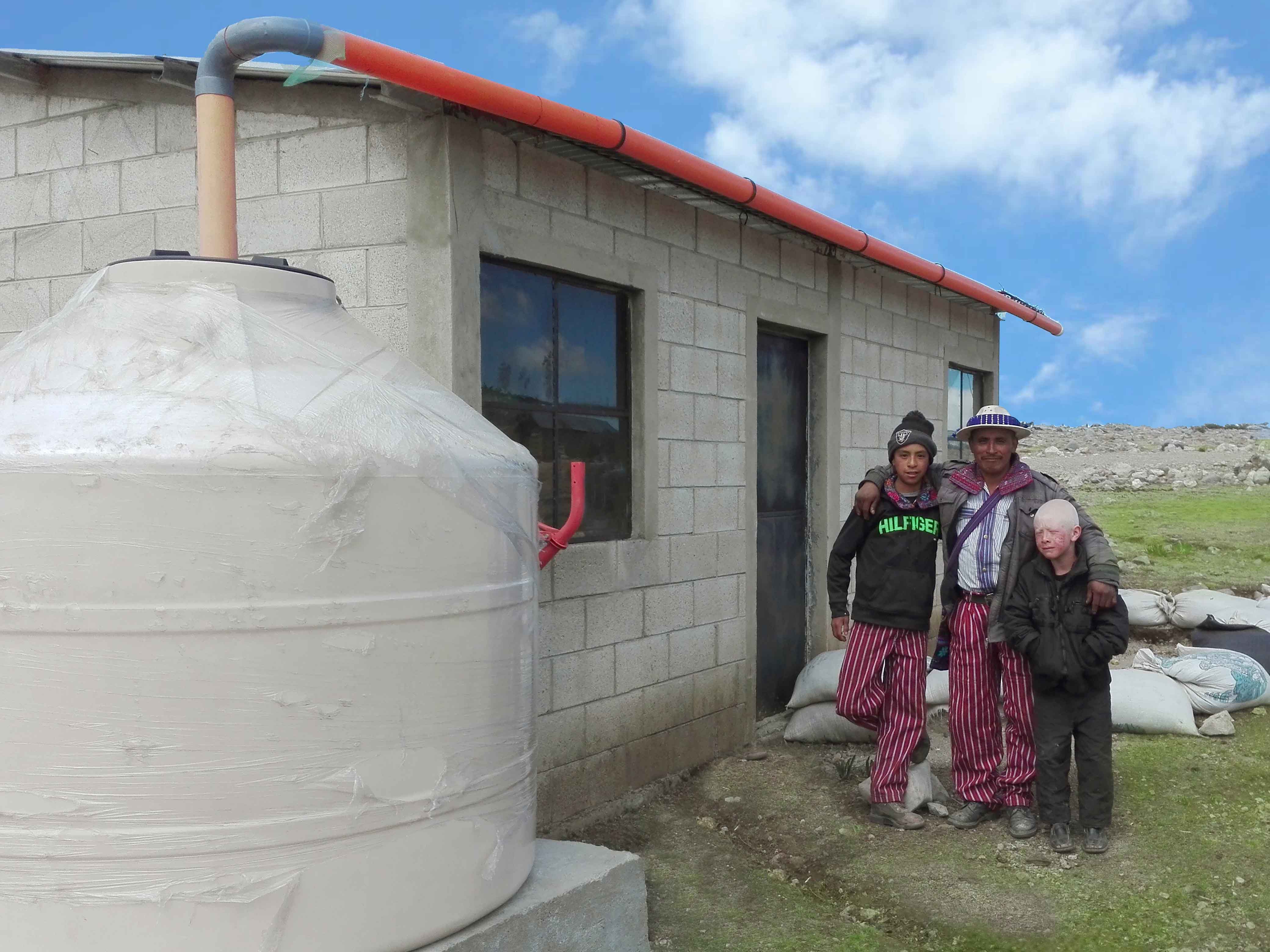 “We came to know Habitat for Humanity Guatemala because they came to us. A man was walking around door to door, asking if we were interested in one of these special kits.”

Pedro Felipe Domingue (27) leans back in his chair as he recounts the story, scratching his head to remember the details. The kit that he describes would include a smokeless stove, latrine, and water filter. The man told Pedro that all three items would dramatically improved his family’s health circumstances.

It sounded too good to be true. “We would make monthly payments and learn how to build and use these items so that our family would be better off,” says Pedro. “So we figured, why not?”

“We were definitely interested,” Pedro’s wife, Juana (21), adds. “We sent in an application in my name that day for a Healthy Home Kit.”

As they speak, their three small children, seven-year-old Briselda, five-year-old Brenda, and two-year-old Ventura, scatter about their kitchen. Briselda focuses on her homework at the dining room table while Brenda and Ventura sit and roll a rubber ball between them. They giggle at their game.

This scene would have been impossible months before. Pedro and Juana recall that their kitchen always filled with smoke from an old and rickety stove, which was dangerous for their family. “Our old stove was made of rocks that were stuck together with a grill on top,” Juana says. “There was a lot of smoke that came out of it, but that’s gone now. It used to cause us a lot of problems with coughing, and we were sick a lot, but we haven’t been to the doctor since we built this new one.”

Since installing their smokeless stove, the family also no longer has to spend a fortune on firewood. “It only takes three pieces of wood to heat up the entire stove,” says Pedro. “Before, it was triple that amount.”

The couple has lived in the community of Aldea Chacaj Nentón for all of their lives, but faces daily struggles. Pedro works in the community as a farm laborer, usually picking up shifts on coffee farms in the area, but has been unable to find steady work. As a result, money is tight. Despite their family’s circumstances, he is determined to make himself useful when possible. Discovering Habitat Guatemala has brought just that. Getting involved with his own Healthy Home Kit project allowed Pedro to invest in a newfound educational opportunity. “I built the stove myself,” declares Pedro proudly. “A mason from Habitat Guatemala taught me how to do it, and I just jumped right in. It took me about a day in total. Now, I can help teach other people in my community how to make their own.”

He is also happy with how the family’s latrine turned out. “The latrine took four days for me to build,” he explains. “Before, we used an abandoned well as our latrine, which was badly built and dangerous. It didn’t have any walls or privacy. The dirt around it fell away and made a huge hole in the ground, which made the whole thing unsteady.”

“I like how our new latrine has an aluminum roof,” mentions Juana. “The wind and water can’t enter, and it feels more secure.”

The Healthy Home Kit’s filter feature has also brought their family clean and easier access to water. “For a long time, we used the town service to deliver water, which was 12Q ($1.75) each time we wanted something,” says Juana. “But now, we use the river. It takes less time, because we can do it ourselves.”

Juana and Pedro would like to thank Irving and Lois Hall, as well as their friends, who financially supported the project and who have changed the way their family lives. “Thank God that we have been helped and supported in this way by you. We are blessed in so many ways. You have made the smoke go away, you have made the sickness heal. Thank you for our health. May you continue supporting more people like us, who have the chance at a better life.”

The Amperez Family
Scroll to top